Pleasant Plains Workshop is also  an arts incubator,  offering studio/work space for 8 artists in two spaces, the Brookland studios and the Euclid Street Studios. Resident Artists are keyholders of PPW and have 24 hr access to their own spaces and the print studio. They also help operate the gallery and shop and also have the opportunity to show and sell their work there. Resident artists also teach individual and group lessons in the workshop side of the building.

Learn more about all of our current resident artists below: 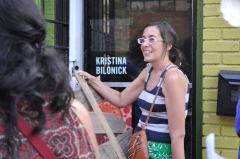 Kristina Bilonick is a resident artist and the founder of Pleasant Plains Workshop. Her art practice utlizes screen printing,  installation and  performance art.  Kristina also has a line of screen printed wares and can do custom, small-batch screen-printing jobs.  In addition to her work at PPW she is  the captain of a performance art cheerleading team, helps organize the Georgia Avenue Window Walk  and manages a building of art studios in the Takoma neighborhood of DC.
To see some of her artwork visit:  kristinabilonick.net

Ken Ashton resides in Washington, DC, and has spent the past decade photographing neighborhoods both in DC and throughout the world. Ashton works at the Corcoran Gallery of Art, and is represented by Civilian Art Projects.  Ashton’s work has been featured in exhibitions in many venues including theWashington Center for Photography, Museum of Contemporary Art (DC), Anacostia Museum, Arlington Arts Center, Charlottesville’s Second Street Gallery and Longwood Center for the Arts in Farmville, VA. Ashton received his BFA from James Madison University. Learn more about Ken on his blog>> and on the Civilian Art Projects web site>> 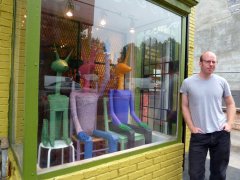 Anthony Dihle/ Fire Studio:
Anthony is a resident artist at Pleasant Plains Workshop. He has screen printed concert posters for local and internationally known bands such as Greenland, Exit Clov, Elvis Costello and Jay-Z. In addition to making work, he has curated multiple gallery shows at local art spaces such as Civilian Art Projects and the Athaneum, featuring works of other masterful printer-designers. Dihle also creates hand printed greeting cards, t-shirts, and sculptures. Find out more about Anthony and his work on his web site>> 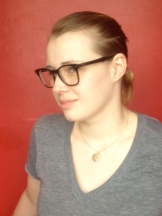 Bethany Hansen / The Arcade
Raised in Dover, Delaware, Bethany Hansen came to Washington, DC in 2004 to study printmaking and sculpture at the Corcoran College of Art + Design. After graduating in 2008, she stayed in Washington area, and helped coordinate the printmaking studio at the Corcoran College and worked as a studio assistant     for Dennis O’Neil at the Hand Print Workshop International in Alexandria, Virginia. In 2009, Bethany began a master’s program in printmaking at Indiana University in Bloomington, but returned to the District in 2010. Since then, she has continued printing and making mixed media sculptures, and has consistently participated in local print portfolios and group exhibitions. Last year, Bethany co-founded an art collective called the Arcade with Ann-Marie Van Tassell. The group is dedicated to providing spaces for artists in which to work, and promoting and educating art in the Petworth neighborhood. check out the web site for more info>>

Chris Haughery:
Chris Haughery has been working primarily in silk screen printing since 2007. Originally from Lancaster,  PA, Chris moved to Philadelphia, PA to attend Temple University where he graduated in 2009. While in Philadelpia he continued to explore silk screen printing and participated in various group art exhibitions. Chris has worked as a freelance graphic designer since 2009 and moved to Washington, DC in 2011, where he continues to explore the art of print making and design.  Learn more about Chris and his work on his web site>> 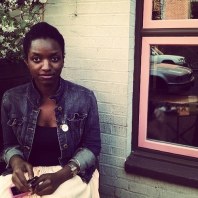 Danielle Scruggs (b. 1985, Chicago, IL) is a photographer and photo editor living and working in Washington, D.C. She has exhibited her work throughout the DC metropolitan area, Brooklyn, Baltimore, and Los Angeles. Her first solo exhibit Body Politic: Cultural Identities and Representations of Black Women’s Sexuality debuted in 2013 at Luther College (Decorah, IA). Residences and awards include:  The Center for Photography at Woodstock (2013), The Wassaic Project (2012). The Washington Post, PBS MediaShift, Stop Smiling Magazine, and LivingSocial have published her editorial and commercial work. She has also written essays and reviews on arts and culture for The Liberator Magazine, Charm City Current, and Specter Magazine.  Scruggs is the co-founder and Research and Media Director of Mambu Badu Photography Collective, which launched in 2010 to find, expose, and nurture self-identified women photographers of black/African descent. She also works at LivingSocial as an Assistant Photo Editor. Check out more of her work on her web site: daniellescruggs.com

Ann-Marie VanTassell / The Arcade:
Ann-Marie VanTassell is a photographer based out of Washington, DC.  She is a graduate of the Corcoran College of Art and Design, where she received her BFA in Photojournalism. She is also currently working with Beth Hansen on their start-up Art Education non-profit, ‘The Arcade. Learn more about The Arcade here>> 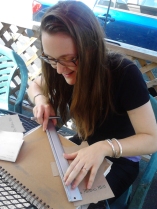 Martine Workman:
Martine Workman is a DC-based artist making books, drawings and animation. She is a graduate of California College of the Arts and a 2013 fellow of VCCA. Martine has been participating in small press fairs across the country since 2004. www.martinealicia.com

Champneys Taylor (2012)
Champneys ‘Champ’ Taylor was born in Jacksonville, Florida,  and lives in Washington, DC. Taylor is a 2012 fellow at the Virginia Center for Creative Arts (VCCA). Between 2005 and 2007 he regularly exhibited work at Cynthia Broan (New York City). His video work was screened at the Armand Hammer Auditorium in 2006 and 2007 as part of the Washington Project for the Arts “Experimental Media” series. In 2000 Taylor co-founded the artists’ collective Decatur Blue, an organization with which he showed works at galleries and art spaces in DC, Baltimore, Philadelphia, and Miami Beach, until 2005. His work has been exhibited in group shows at Transformer (DC), Millenium Art Center (DC), and Salve Regina Gallery, Catholic University. Earlier this year, he mounted a solo exchibition at DC Arts Center. His work is in public and private collections in Kansas City, Las Vegas, New York City, Washington DC, and Brescia, Italy. See more of his work at: www.champneystaylor.com

Angela Douglas is a DC based artist who champions nature awareness, the environment, & farm to table practices in her life and work. Having a BFA degree from George Mason University, Angela tends to use a variety of mediums including: watercolor, acrylic, oil, spray paint, collage & photography. As for the work, sneak a peek at http://www.angeladouglas.tumblr.com 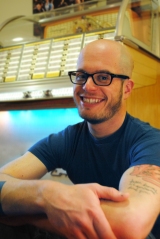 Memory maker Jared Earley merges creative penchants for food, film, and music through professional stints and personal indulgences: Based in BloomingdaleDC (via Cleveland, Pittsburgh, and Philadelphia), he is a marketing professional for Whole Foods Market by day, a programmer for the Provincetown International Film Festival by night (and weekend, and sometimes more), and participates in various events, publications and civic organizations here + there. Hatched with heartfelt intention (and the slogan “Inspired to share, handled with care”), his online venture, Spinagram.com —specializing in hand-lettered gift handling of movies and vinyl music —will launch in late summer 2013.

Rujunko Pugh (2012 & 2013):
Rujunko Pugh works in digital and analog photography including alternative photography methods. She has an MS in Molecular Biosciences and Bioengineering and is currently based between Washington, D.C. and Rome, Italy. In 2009, she moved from Honolulu, Hawaii to Washington and since then, she has shown her work at Club Machiavelli, MakeMake, Mid City Cafe, Logan14 Aveda Salon, and Long View Gallery. She has also participated in local auctions such as Art for Life and Hickok Cole Art Night. While in Hawaii, she received recognition for her photography and has exhibited her work at Honolulu Academy of Arts, Japanese Chamber of Commerce, The Contemporary Museum, and Club Monaco. In Nairobi, Kenya. She was a resident artist at Kuona Trust and British Institute in Eastern African Institute for Human Security. In 2011, she was the  Auction Coordinator for the Washington project for the Arts and the Social Media Director for the Vanuatu Pacifica Foundation founded by Paul Miller aka DJ Spooky. Find out more at Rujunko’s website: www.rujunkopugh.com. 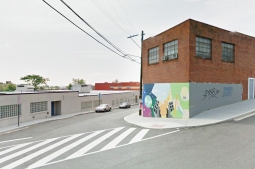 Open for events, classes, and by appointment.